“Science and magic, beauty and bedlam, things that ought to be at odds—they just don’t follow the same rules when Jackaby’s involved.”

Newly arrived in New Fiddleham, New England, 1892, and in need of a job, Abigail Rook meets R. F. Jackaby, an investigator of the unexplained with a keen eye for the extraordinary–including the ability to see supernatural beings. Abigail has a gift for noticing ordinary but important details, which makes her perfect for the position of Jackaby’s assistant. On her first day, Abigail finds herself in the midst of a thrilling case: A serial killer is on the loose. The police are convinced it’s an ordinary villain, but Jackaby is certain it’s a nonhuman creature, whose existence the police–with the exception of a handsome young detective named Charlie Cane–deny.

Doctor Who meets Sherlock in William Ritter’s debut novel, which features a detective of the paranormal as seen through the eyes of his adventurous and intelligent assistant in a tale brimming with cheeky humor and a dose of the macabre.

“I’ve found very little about private detective R. F. Jackaby to be standard in the time I’ve known him. Working as his assistant tends to call for a somewhat flexible relationship with reality.”

In 1892, New Fiddleham, New England, things are never quite what they seem, especially when Abigail Rook and her eccentric employer R. F. Jackaby are called upon to investigate the supernatural.

First, a vicious species of shape-shifters disguise themselves as a litter of kittens, and a day later, their owner is found murdered with a single mysterious puncture wound. Then in nearby Gad’s Valley, now home to the exiled New Fiddleham police detective Charlie Cane, dinosaur bones from a recent dig mysteriously go missing, and an unidentifiable beast starts attacking animals and people, leaving their mangled bodies behind. Charlie calls on Abigail for help, and soon Abigail and Jackaby are on the hunt for a thief, a monster, and a murderer.

Jenny Cavanaugh was dead, and she wasn’t happy about it.

Jenny Cavanaugh, the ghostly lady of 926 Augur Lane, has enlisted the investigative services of her fellow residents to solve a decade-old murder—her own. Abigail Rook and her eccentric employer, Detective R. F. Jackaby, dive into the cold case, starting with a search for Jenny’s fiancé, who went missing the night she died. But when a new, gruesome murder closely mirrors the events of ten years prior, Abigail and Jackaby realize that Jenny’s case isn’t so cold after all, and her killer may be far more dangerous than they suspected.

Fantasy and folklore mix with mad science as Abigail’s race to unravel the mystery leads her across the cold cobblestones of nineteenth-century New England, down to the mythical underworld, and deep into her colleagues’ grim histories to battle the most deadly foe she has ever faced.

“Yes, Mr. Jackaby,” I whispered back.

“I think you ought to know. I’m about to do something very foolish.”

The fate of the world is in the hands of detective of the supernatural R. F. Jackaby and his intrepid assistant, Abigail Rook. An evil king is turning ancient tensions into modern strife, using a blend of magic and technology to push Earth and the Otherworld into a mortal competition. Jackaby and Abigail are caught in the middle as they continue to solve the daily mysteries of New Fiddleham, New England — like who’s created the rend between the worlds, how to close it, and why zombies are appearing around town. At the same time, the romance between Abigail and the shape-shifting police detective Charlie Cane deepens, and Jackaby’s resistance to his feelings for 926 Augur Lane’s ghostly lady, Jenny, begins to give way. Before the four can think about their own futures, they will have to defeat an evil that wants to destroy the future altogether.

The epic conclusion to the New York Times best-selling Jackaby series features sly humor and a quirky cast of unforgettable characters as they face off against their most dangerous, bone-chilling foe ever.

BONUS—FREE JACKABY SHORT STORY:
(Downloadable to your preferred eReader below)

Abigail hopes that her birthday will slip by unnoticed and uncelebrated, but her employer, detective of the supernatural R.F. Jackaby, has other plans. Using magical party crackers that teleport the pair to unknown destinations in time and space and a cryptic map that may lead to a forgotten treasure, Jackaby intends to give Abigail what he considers to be the best gift of all – adventure.

Cole nodded into the dark.

Magic is fading from the Wild Wood. To renew it, goblins must perform an ancient ritual involving the rarest of their kind—a newborn changeling. But when the night arrives to trade a human baby for a goblin one, something goes terribly wrong. After laying the changeling in a human infant’s crib, the goblin Kull is briefly distracted. By the time he turns back, the changeling has already perfectly mimicked the human child. Too perfectly: Kull cannot tell them apart, so he leaves both babies behind.

Tinn and Cole are raised as human twins, neither knowing what secrets may be buried deep inside one of them. When they are thirteen years old, a mysterious message arrives, calling the brothers to be heroes and protectors of magic. The boys must leave their sleepy town and risk their lives in the Wild Wood, journeying through the Deep Dark to reach the goblin horde and uncover who they truly are.

In this first book in a new fantasy-adventure series, New York Times bestselling author William Ritter takes readers on a journey of monsters, magic, and discovery. 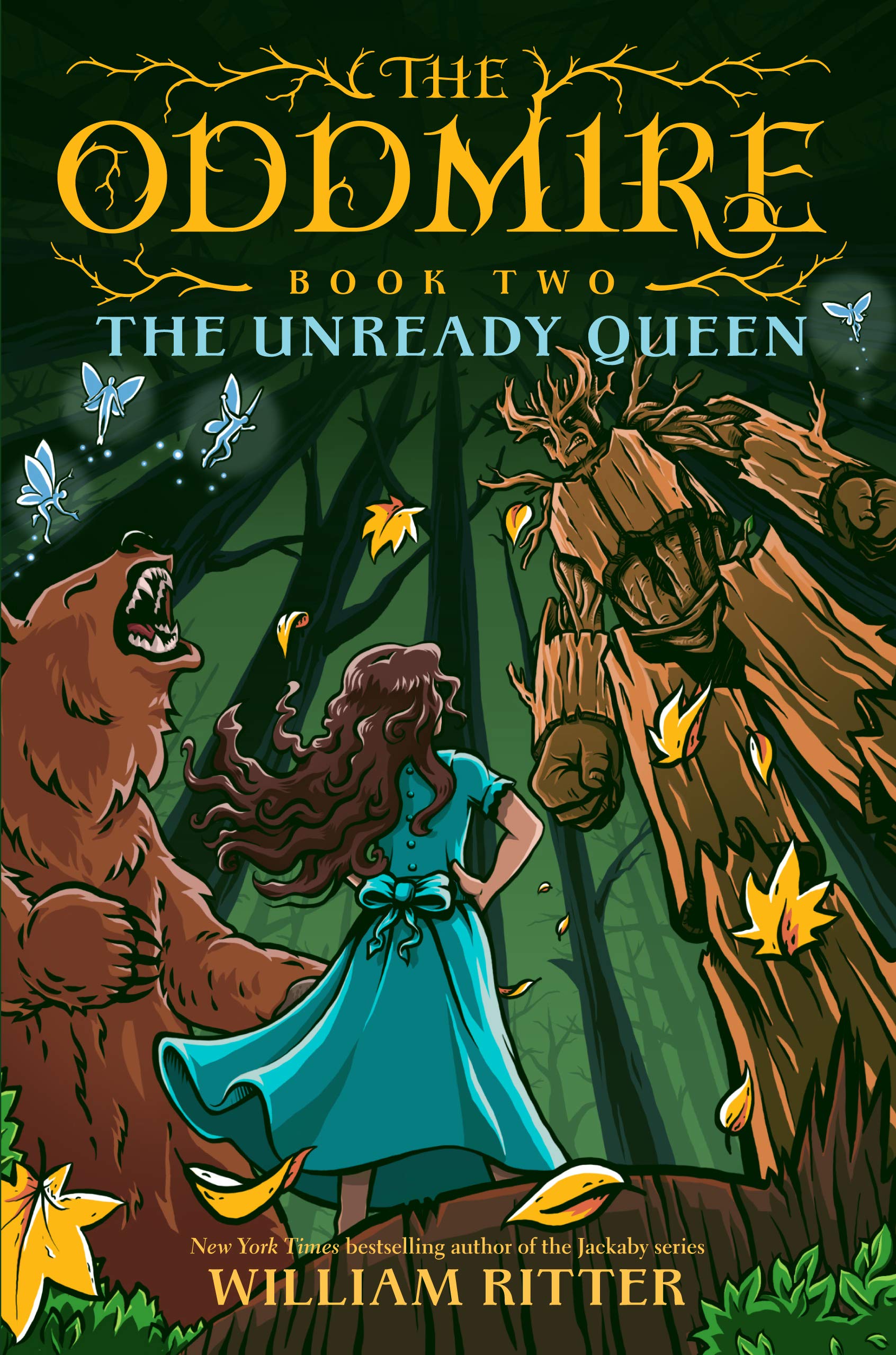 The vines were gone. Not that the Queen had any interest in restoring the wretched plants, but it unnerved her that she could not have done so even if she tried. There was no spell to unravel. They had simply been dismissed from reality, and Fable didn’t seem to realize what she had done. The Queen closed her eyes and took a deep breath.

Beneath her, the earth trembled.

Human and goblin brothers Cole and Tinn are finding their way back to normal after their journey to the heart of the Oddmire. Normal, unfortunately, wants nothing to do with them. Fable, the daughter of the Queen of the Deep Dark, has her first true friends in the brothers. The Queen allows Fable to visit Tinn and Cole as long as she promises to stay quiet and out of sight—concealing herself and her magic from the townspeople of Endsborough.

But when the trio discovers that humans are destroying the Wild Wood and the lives of its creatures for their own dark purposes, Fable cannot stay quiet. As the unspoken truce between the people of Endsborough and the inhabitants of the Wild Wood crumbles, violence escalates, threatening war and bringing Fable’s mother closer to the fulfillment of a deadly prophecy that could leave Fable a most Unready Queen.

“The unique, inspiring characters are full of heart, and combined with the enchanting magic surrounding them have the makings of a fantastical classic. Perfect for fans of titles such as Harry Potter, Gregor the Overlander, and for lovers of fantasy titles.” —BOOKLIST (starred review)