A student recently asked me if writing fantasy is harder than writing “normal” stories. For me, writing strange & impossible is infinitely easier than writing normal. This may be because the longer I pay attention, the less I believe that normal exists.

I’ve heard the phrase “write what you know” countless times. It’s good advice, but it doesn’t lead me to normal. I don’t know normal, and I’m yet to meet anyone who does. Everyone has that peculiar aunt with that curious hobby, or that pet that does that thing. Everyone takes that moment to prepare a friend before meeting their family. “Just so you know,” you’ve probably said, “my family can be kinda weird…” as though there exists a family in the world that isn’t.

My own grandfather, William Campbell, didn’t want his kids to be ashamed of their bodies, so he frequently went nude around the home. Apparently this caused a stir when a work colleague popped by one weekend—but my grandfather hardly batted an eye. From behind his morning paper, old William Campbell welcomed his associate. “Lovely to see you. Johnny, be a good boy and show my friend to the living room, would you? Katherine, darling, would you fetch my pants? Splendid, thank you.” Normal as can be, right? 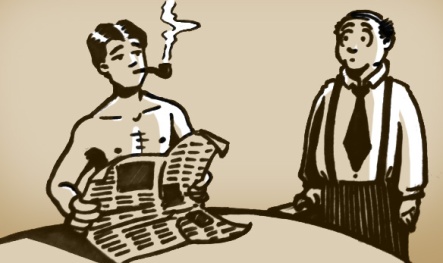 Statistically, the most normal person in the world is a male, Chinese, Christian farmer named Mohammed, but people who meet ALL of those qualifications are rare. So, how does anyone write “normal” stories? My writing draws on many things—stories I’ve read, things I’ve done, and mostly people I’ve met. I write about weirdos quite simply because I don’t know anybody else.

Once, while waiting tables on a graveyard shift, an unassuming man who had been sipping coffee for an hour suddenly called me over to his booth. He had a stack of amateur photographs spread across the table. “Hey, wanna see a proof of a UFO?” he asked.

“Yes.” I replied without hesitation (I had been rehearsing my response for that question since I was seven).

He showed me three pictures of faintly blurry clouds, earnest as could be. He then invited my only other patrons over as well, a young couple from a nearby booth, to see proof of fairies in the same pile. “Fast little f***ers,” he said soberly as the couple nodded at a photo of a bush. “They’re hard to catch on film.”

He concluded his visit with a trip to the restroom, during which the young couple and I exchanged glances as we began to hear loud harmonica music emanating from the men’s room. It went on for a few minutes before the photographer emerged with the instrument still on his lips—not halting his boisterous melody once as he strode out the door and into the night.

I don’t know what a “normal” diner night shift looks like, but on mine I met musical cryptozoologists, elderly swingers, polite strippers and rude clergymen—oh—and Santa Clause. That one was Christmas morning. I worked all night on Christmas Eve, and as the sun rose, a plump, jolly fellow with a white, bushy beard and a kelly-green tank top (in spite of the below-freezing weather) strode in and took a seat at the counter.

“Mornin’,” he said with a smile. “I need me a slice of pie before I head home. I earned it tonight.”

He looked tired. “Long night?” I asked, setting down the pie.

“The longest,” he said. He had rosy cheeks and a twinkle in his eye. Using my cell phone camera, I snuck a blurry picture of Saint Nick that would’ve made the harmonica-playing photographer proud. (He had a cover story about being a biker named Rebel who cleaned taverns after-hours—but I knew better than to believe the jolly old elf.)

Life is weird. Not long ago I was serving pie to truckers and oddballs at 3:00 AM. Since then, my path has made me a father, made me a teacher, made me a foreigner living across the world, and made me an author back home.

I write what I know. My narrative voice is from a gender, country, and era that are not my own. Her story is filled with creatures I have seen only in my imagination and with characters who exist only on the page… but I know the strangeness of my fantasy more intimately than I have ever known anything “normal” in the real world. I was raised on stories about myth, magic, and monsters. I’ve seen proof of UFOs and Fairies, and I met Santa Clause on Christmas morning—but I will need a great deal more evidence before I will consent to believe that normal exists.